Although results have yet to be certified and are still considered to be preliminary, nearly $1.2 billion of General Obligation bonds were approved by Colorado voters. While this election was generally deemed a success for local governments when compared with the November 2020 election, which approved $1.6 billion of issuance, one may say this election fell a bit short. By election measure, approximately 59% of issues were approved, which represents 55% of the total requested par amount (see below). 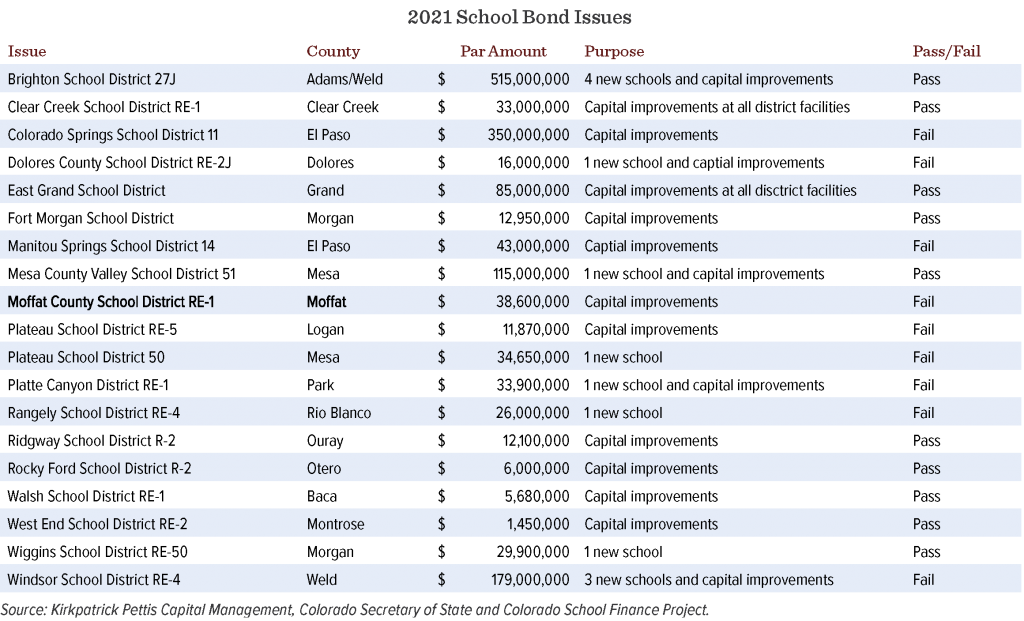 Overall, voters continue to demonstrate a willingness to approve local bond measures, which provide new schools and other capital improvements throughout the state. We believe results of these elections should provide the Aquila Tax-Free Fund of Colorado with a broad opportunity to invest in a variety of projects as bonds are sold later this year and into 2022.

¹The Taxpayer’s Bill of Rights (“TABOR”) Amendment was approved by voters in 1992. This amendment to the Constitution of the State of Colorado limits the amount of revenue the state can retain. The TABOR limit is equal to the lesser of the prior fiscal year’s revenue limit plus the rate of inflation and population growth in Colorado or the current fiscal year’s revenue. Also, the TABOR Amendment requires voter approval for certain tax increases.

²Mill Levy Correction refers to a legal and legislative directive to correct an interpretation of statute by CDE that led to a historical under collection of property taxes in education in Colorado school districts. Mill Levy Correction was implemented starting in the 2021 tax year.

This document is provided for informational purposes only. It is not intended to represent a recommendation to buy or sell any particular investment or security.

Before investing in the Fund, carefully read about and consider the investment objectives, risks, charges, expenses and other information found in the Fund prospectus. The prospectus is available from your financial professional, and when you call 800-437-1020 or visit www.aquilafunds.com.