Updates and Perspectives: The Arizona Economic and Pandemic Recovery

Arizona recently reported an unemployment rate of 6.7% in September, adding 30,200 more jobs. While it was an increase from the 5.9% rate reported in August, the uptick was fueled by an increase of 150,000 in job seekers entering the labor pool. This jump was attributed to the quickly recovering state economy that offered motivation and hope for those who had lost jobs when the state economy was “furloughed” in April.

The reopening of the economy following the end of Governor Ducey’s shelter at home mandate has helped drive the unemployment rate down almost 40% from a 10.7% rate in July. Arizona now boasts an unemployment rate well below the overall US rate reported in September of 7.9%. Impressively, only two states larger than Arizona (Virginia and Georgia) reported a lower unemployment rate (6.2% and 6.4%, respectively) in September.

Payrolls Protected are the Key

Arizona’s economic recovery from the Coronavirus pandemic accelerated dramatically in the past quarter.

Most encouraging has been the resilience of overall employment levels in the state. The employment base is the lifeblood of the State economy and can be a significant proxy for the health of the state and local government finances. Maintaining employment levels translates to jobs kept, household incomes maintained, income and sales taxes paid, and tax bases sustained.

From August 2019 – August 2020 employment in the state declined only -3.2%, ranking 4th lowest in the nation and the best among any state of its size or smaller. This deterioration in the employment base was less than half the U.S. average of -7.0% for this period.

This is especially impressive when considered within the context of the largest states. Arizona is currently the 14th most populous state. Among the thirteen larger states by population, only three (also “sunbelt states”) retained a higher share of jobs than the national average:

Arizona is seeing the massive injection of fiscal stimulus weave its way into the economy. The Payroll Protection Program (PPP) Loans have been one of the main contributors to economic stability to towns and local governments in Arizona. According to SBA figures, over $8.6 billion of PPP loans have been made to 81,000 recipients in Arizona, potentially saving over 750,000 jobs statewide. This encompasses a broad swath of industries, businesses, and organizations throughout the State.

Almost 70,000 such loans were for less than $150,000. This was a critical component of Arizona’s employment resilience as small businesses are an especially prominent engine of the Arizona economy. The massive fiscal response of the Federal government to the Coronavirus Pandemic, and its implementation at the state and local level, helped employment at small businesses rebound dramatically.

When widespread lockdowns of state economies took place last April, employment at small businesses with 49 or fewer employees experienced a decline that was three times that of larger companies with over 500 employees. But by the end of September, after the sizeable fiscal relief was targeted to small business, employment of those small employers had shown the largest recovery: 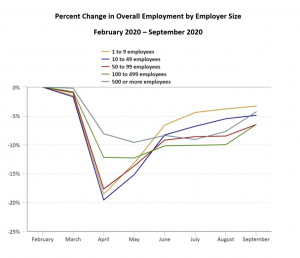 The Labor Force is a Force

Employment has held up despite an acceleration in the growth of the State’s labor force, as Arizona’s population growth of 1.7% outpaced the U.S. growth rate of 0.5%.

An increasing share of population growth combined with an increasingly diversifying economy also contributed to Arizona’s ranking as a jobs creator. The five year annualized employment growth rate for the State of 1.2% through June 2020 ranked 4th highest in the country. This period includes the impacts in the second quarter of the Covid-19 economic shutdown.

Arizona has been able to create some maneuverability in preventing the states healthcare infrastructure from being swamped. Medical facilities and resource utilization numbers had been climbing steadily and appeared to be reaching capacity in July. A closer look also reveals that Arizona has achieved a vital degree of flexibility through managing and optimizing its resources statewide.

While resource utilization seemed to approach capacity in July with the onset of 100,000 new cases in three months, the state was able to acquire and expand the additional resources and facilities needed to prevent the system from becoming overwhelmed. This was in stark contrast to other regions of the country where healthcare resources and providers were pushed to the limit. Since the peak in cases this summer, the state now has an increased supply of ventilators and ICU and emergency department bed capacity heading into the winter and flu season.

A closer look at ICU and inpatient bed usage shows a substantial decline in the amount of those beds filled by Covid-19 patients:

The surge was driven by the some of the State’s largest and most recognized issuers who took advantage of an interest rate environment where yields on the highest quality bonds reached generational lows at the end of July and remain suppressed.

• $398 million issue in August from Phoenix Civic Improvement Authority (Aa2 Moody’s, AAA S&P), one of the highest quality issuers in the state. It took advantage of generational lows in market yield to lock in a 10-year maturity borrowing cost of 0.83% on its excise tax revenue bonds, a borrowing spread of only 24 basis points above comparable maturity AAA general obligation bonds.

• $602 million issue sold by the Salt River Power (SRP) Authority (Aa1 Moody’s, AA+ S&P) at end of September. SRP is one of the most recognized and respected issuers in the entire municipal bond market. Its highly regarded credit quality contributed to the 7-year maturity yield it obtained of 0.65%, a very narrow 14 basis point borrowing spread above comparable maturity AAA general obligation bonds.

• $249 million issue in August from Phoenix Children’s Hospital (PCH) (A1 Moody’s, A S&P). This issue attracted a whopping $5 billion in orders. The impressive 20 times amount of oversubscription for the issue enabled PCH to obtain a borrowing cost on a 10-year maturity of only 1.15%, resulting in borrowing spread of 60 basis points above comparable 10 Year maturity AAA general obligation bonds. This reflects the Hospital’s decade long recovery from the credit crisis and strong operating adjustment to the Coronavirus pandemic.

The reception Phoenix Children’s Hospital received from investors for its bonds reflects the important view that financial market participants have of the success Arizona is achieving in navigating the Coronavirus Pandemic. Municipal bond investors as a group are among the most discerning and risk-averse evaluators of fiscal stability. Their reading of the economic tea leaves can offer valuable insight into the effectiveness of Arizona’s ability to respond to the Coronavirus Pandemic in protecting the health of the population while simultaneously maintaining the economic security of the population.

We sat down with Portfolio Manager, Tony Tanner, CFA®, on March 17th to get his ›