Municipals Versus Treasuries – A tale of two Cities

The recent price changes in the municipal bond market have potentially created an intriguing opportunity for investors; with municipal bonds selling at relatively enticing yields, even without considering the tax benefits. However, this market is likely to be short lived as investor behavior is stabilizing. In situations of this magnitude, credit research becomes more important than ever and as a result our Portfolio Managers continue to maintain close relationships with bond issuers.

Although municipal bonds tend to be more resilient to economic downturns due to their revenue sources, we consistently monitor portfolio holdings to evaluate their ability to withstand the potential for economic slowdown, and we believe that our portfolios have weathered the most recent market conditions just as we expected. Over the past few weeks, the municipal bond market has experienced a significant sell-off in state and local government debt, despite a climb in global bond prices, as investors struggled to come to terms with the volatile capital markets amidst the uncertainty of the COVID-19 pandemic. 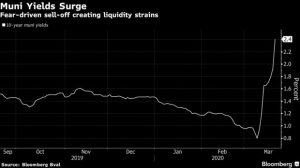 The strength in the Treasury market has largely been driven by the Fed which has reactivated monetary policies from the 2008 financial crisis in support of our weakening capital markets. The Federal Reserve has stated its intention to buy Treasury securities and agency mortgage-backed securities in “the amounts needed to support smooth market functioning and effective transmission of monetary policy to broader financial conditions and the economy.” The Fed initially announced its intention to purchase at least $700 billion in asset purchases, of which approximately half of the $500 billion allotment for Treasury purchases was consumed in the first week. It is important to note, that as of the date of this writing, there has yet to be government stimulus in the municipal bond market. On March 24, 2020 the Fed announced support to municipalities through expansion of the Money Market Mutual Fund Liquidity Facility to include variable rate demand notes (VRDNs) and bank CDs, with high-quality tax-exempt commercial paper now eligible for the Fed’s commercial paper facility. However, no other monetary stimulus has been extended to the muni market, which has resulted in the extreme differential of yields. In addition, the Fed will be assuming the role of a commercial bank with the introduction of a Main Street Business Lending Program for small and medium-sized businesses. Collectively, the actions by the Fed reinforce its “whatever it takes” approach and demonstrate broad based support of the capital markets.

Investors have inquired about the impact of the virus on airports, convention centers, hospitals and transit systems. While we agree that there is additional risk to many of the transit and hospitality related credits, our credit research is shifting toward the increasing reality of economic downturn and recession as a credit driver. Our concern is more for an increase in rating downgrades rather than defaults. There are certain credits and sectors, such as higher education and healthcare, where we expect to see limited distress. Furthermore, we expect to see weaker pension funding as pension plans struggle with return assumptions.

Aquila Group of Funds’ seven single-state municipal bond funds are structured defensively to withstand periods of uncertainty with a focus on high-quality holdings and limited duration risk. We continue to see the municipal bond asset class as a viable consideration for investors seeking high-quality, tax-exempt income.

The percentage of portfolio holdings rated AA or higher includes pre-refunded bonds. Fund Characteristics are as of 2/28/20.

Effective duration both measure the value of a security in response to a change in interest rates, and also takes into account the effect of embedded options.