Standard and Poor’s Global Ratings recently announced they consider the state of Kentucky “adequately positioned” to handle economic pressures brought on by the COVID-19 pandemic. 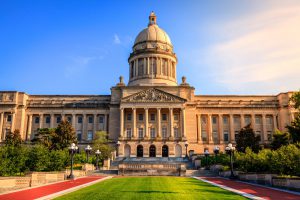 In an effort to effectively address the state’s rapidly changing needs, the Kentucky Legislature, which normally releases a biennial budget, passed House Bill 352 on April 15th, adopting an $11.4 billion one-year executive branch budget. The fiscal 2021 budget reduced the revenue forecast by $130 million, but S&P cited that they firmly believe Kentucky has sufficient near term liquidity to manage pressures brought on by economic hardships related to the pandemic. The bill also fully funds the teachers and state employees’ pension plans. Fiscal year 2021 will mark the second year in a row that Kentucky has made full contributions to those plans.

If excessive pressure does weigh on the state’s finances due to the current crisis, Kentucky also has the ability to issue Tax and Revenue Anticipation Notes (TRANs) amounting to 75% of estimated revenues anticipated throughout the year.

The recently passed Coronavirus Aid, Relief and Economic Security Act (CARES) created a Coronavirus Relief Fund for state and local governments which is expected to allocate $1.732 billion to Kentucky. Of that amount, $1.6 billion will go to the state, and $134 million will go to the city of Louisville and Jefferson County, the only local government under the law to quality for relief based on the number of residents. Kentucky will also receive approximately $410 million through CARES’ Education Stabilization Fund, which will fund K – 12 education and colleges and universities.

At Aquila Group of Funds, we have been monitoring Kentucky’s economic and credit strength since 1987. We have been pleasantly surprised recently by the resilience of sectors feeling the most stress. For example, the Louisville Jefferson County Airports have over $105 million of unencumbered investments in government agencies, and their annual budget is $75 million. We expect they will be able to withstand a fairly long reduction in revenue. We are also watching private colleges, and believe that they can handle the financial pressure due to their healthy endowments. We believe, through our ongoing analysis, that the state is well positioned to weather this storm with the recently passed budget and emergency government funding.