In unofficial election results, Oregon residents approved over $800 million of general obligation municipal bonds to support local projects proposed by schools, cities, and special districts throughout the State during Oregon’s May 2022 Primary Election. Although results have yet to be certified and are therefore still deemed preliminary, the bonds approved by this election are expected to aid local communities and provide the Oregon municipal bond market with much-needed supply.

Putting the Results in Perspective

There are four scheduled election dates in Oregon each year: the second Tuesday in March, the third Tuesday in May, the third Tuesday in September, and the first Tuesday after the first Monday in November. In November 2008, Oregon voters approved Ballot Measure 56, which repealed a law requiring more than 50% of a county’s registered voters to vote in bond measure elections held in May and November. As a result, the May election has become an important election to follow for new bond measures.

Relative to recent elections, results from the May 2022 Primary Election results appear less supportive then they have been. Although a significant amount of bonds was approved, 86% is going to Beaverton School District. By election measure, the May 2021 election seems as though it was far more successful, with 67% of measures approved versus only 43% of the measures for May 2022. Going back to 2017, this is the least successful bond measure election we have seen, based on preliminary approvals. Oregon typically sees more ballot measures during general elections, which are held in November, of even-numbered years.

While the percentage of measures passing at the May 2022 Primary Election may not have been encouraging, the election did pass an impressive nine measures (see the table below). Although the overall passage rate was not high, the election presented 21 measures for approval. This is the highest amount of bond measures Oregon has seen in a single election since May 2017, when then were also 21 measures. However, 62% of the May 2017 measures passed versus 43% for this election.

Of significant note, several of the schools’ issues has been the Oregon School Capital Improvement Matching program, which is a grant program offered by the Oregon Department of Education, supporting communities that pass general obligation bonds for school improvements. An example from this election is La Grande School District No. 1, which asked voters to approve a $4.845 million bond, which, if approved, will be matched by an additional $4 million from the State. Measures such as this present a value to property taxpayers, since a portion of the project is funded by the matching grant. The measure is currently passing, with over 58% of votes in favor of the measure.

The big winner of this election is Beaverton School District, which passed a $723 million measure to finance a replacement for both Beaverton High School and Raleigh Hills K-8 School, and to complete deferred maintenance and seismic upgrades throughout the district. The largest project contemplated by the bond is $253 million for a new Beaverton High School. The previous school was built in 1916 and is in need of $53 million in repairs.

This election also highlighted the importance of a single vote, with the measure presented by John Day/Canyon City Parks and Recreation District, which is currently deadlocked. As of 5/18/22, the measure was in a dead heat after four additional mail-in ballots brought the total to 789 “Yes” votes, and 789 “No” votes. The measure was presented by the District to finance an aquatic facility, which would serve as the only public pool in Grant County. The District’s current pool has been closed for two years and is scheduled for demolition later this month. 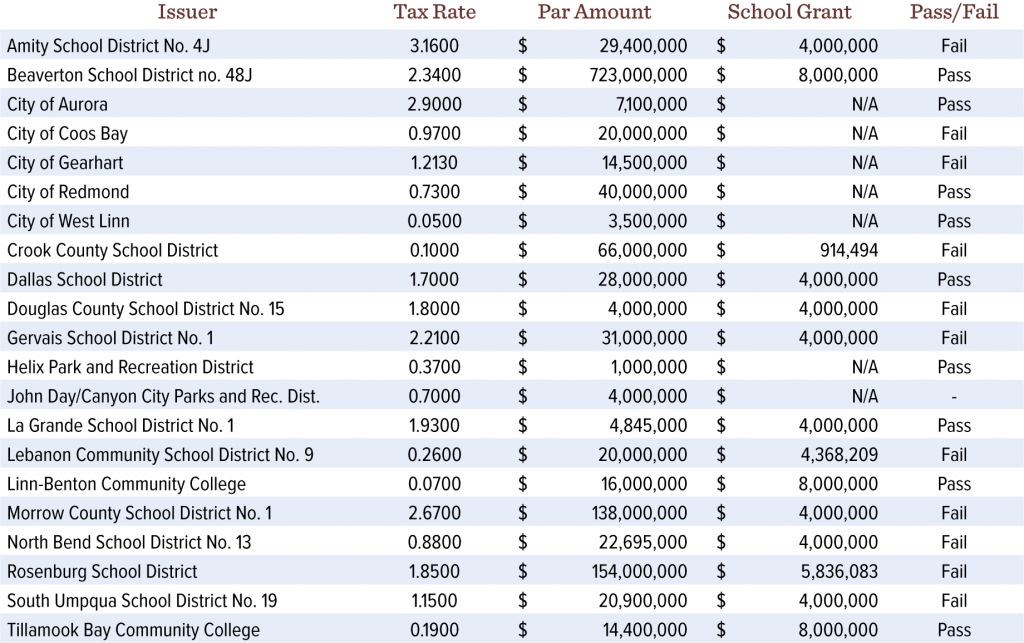 Overall, this election is expected to provide some much-needed supply to the municipal bond market, albeit light. Most of the issues are relatively small, which may not be enough to influence Oregon’s municipal bond market. We anticipate that many of the failed measures will likely be shelved until they can be presented to voters again at a future election. While this election will help alleviate some of the supply concerns, we expect that sourcing bonds in the new issue market will continue to be a challenge for investors and portfolio managers alike.

This article is for informational purposes only and not intended to represent a solicitation to buy or sell any particular security. Opinions shared are those of the portfolio managers and do not necessarily reflect those of the Investment Adviser of the Fund.

Mutual fund investing involves risk; loss of principal is possible. Investments in bonds may decline in value due to rising interest rates, a real or perceived decline in credit quality of the issuer, borrower, counterparty, or collateral, adverse tax or legislative changes, court decisions, market or economic conditions. Trust performance could be more volatile than that of funds with greater geographic diversification.

The Fund seeks to provide as high a level of income exempt from state and federal income tax as is consistent with capital preservation. For certain investors, some dividends may be subject to federal and state taxes, including the Alternative Minimum Tax. Consult a tax professional.

Before investing in the Fund, carefully read about and consider the investment objectives, risks, charges, expenses, and other information found in the Fund prospectus. The prospectus is available from your financial advisor, by clicking here, or by calling 800-437-1020.

Understanding De Minimis as it Relates to Municipal Bonds

The primary benefits offered by municipal bonds are generally well known to investors. Chief among ›

A Shift in Federal Monetary Policy: Assessing the Road Ahead

As the economy continues to recover from the pandemic-driven recession, focus has turned to the ›