Tax Reform 2017 – what does it mean for tax-exempt investments?

While the current tax reform proposal by the White House lacks details, the outline released does include several items meaningful to the individual tax payer:

The proposal is still in its initial stages and will likely have many changes prior to enactment. There are questions as to whether the proposal could influence the municipal bond market and the value of tax-free investing. The following charts display the current federal tax brackets and the initially proposed tax brackets using a hypothetical taxable investment yielding 3% to illustrate Taxable Equivalent Yields. 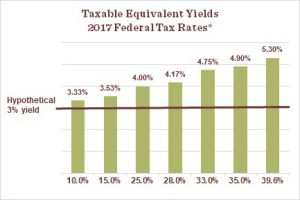 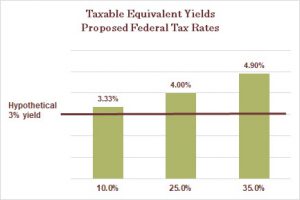 The benefit of tax-exempt income remains, even at the proposed tax rates, although it is reduced slightly by the lower tax brackets. Tax-exempt income continues to provide a significant incentive to consider municipal bonds as an alternative to taxable income investments, particularly for the higher income taxpayer.

*Current taxable equivalent yields are based on 2017 federal tax rates and do not include the 3.8% NIIT where applicable.

These are hypothetical illustrations and do not represent an actual investment, interest rate or return on any investment.

A Shift in Federal Monetary Policy: Assessing the Road Ahead

As the economy continues to recover from the pandemic-driven recession, focus has turned to the ›

In the midst of the pandemic, the subject of public pension funding seems to have ›

The Impact of Sales Tax Revenues

Economic activity in Colorado came to a screeching halt in March 2020 as unemployment surged, ›

Assessing Effects of the Colorado Wildfires

The devastating wildfires in Colorado—particularly, the Marshall Fire that roared through the Town of Superior, ›

Aftermath of the Kentucky Tornadoes

The recent tornadoes that tore throughout Kentucky, as well as five other states, produced devastating ›