Arizona municipal bonds were plentiful in the new issue market during 2019. In fact, it turned out to be the busiest year for new municipal bond issuance in the state for the entire decade. A total of $7.9 billion of new municipal bonds from Arizona’s state and local governments came to market, eclipsing the previous high of $7.5 billion that came to market in 2016. That year, issuers accelerated their borrowing in advance of the 2016 election and potential tax law changes that were expected to limit municipal borrowing.

Revenue bonds dominated 2019 issuance, comprising 83% of the total in Arizona, which is not surprising. Unlike larger states like Illinois and Texas, Arizona does not issue tax-supported general obligation debt. In fact, only about 10% of the approximately $44 billion in outstanding munis in Arizona are state-related obligations.

New municipal bond issues were dominated by the Education, Healthcare, and Transportation sectors, whose capital projects and borrowing needs are most associated with a rapidly growing population. These three sectors accounted for 63% of the total issuance and almost 70% of the new deals brought to market. 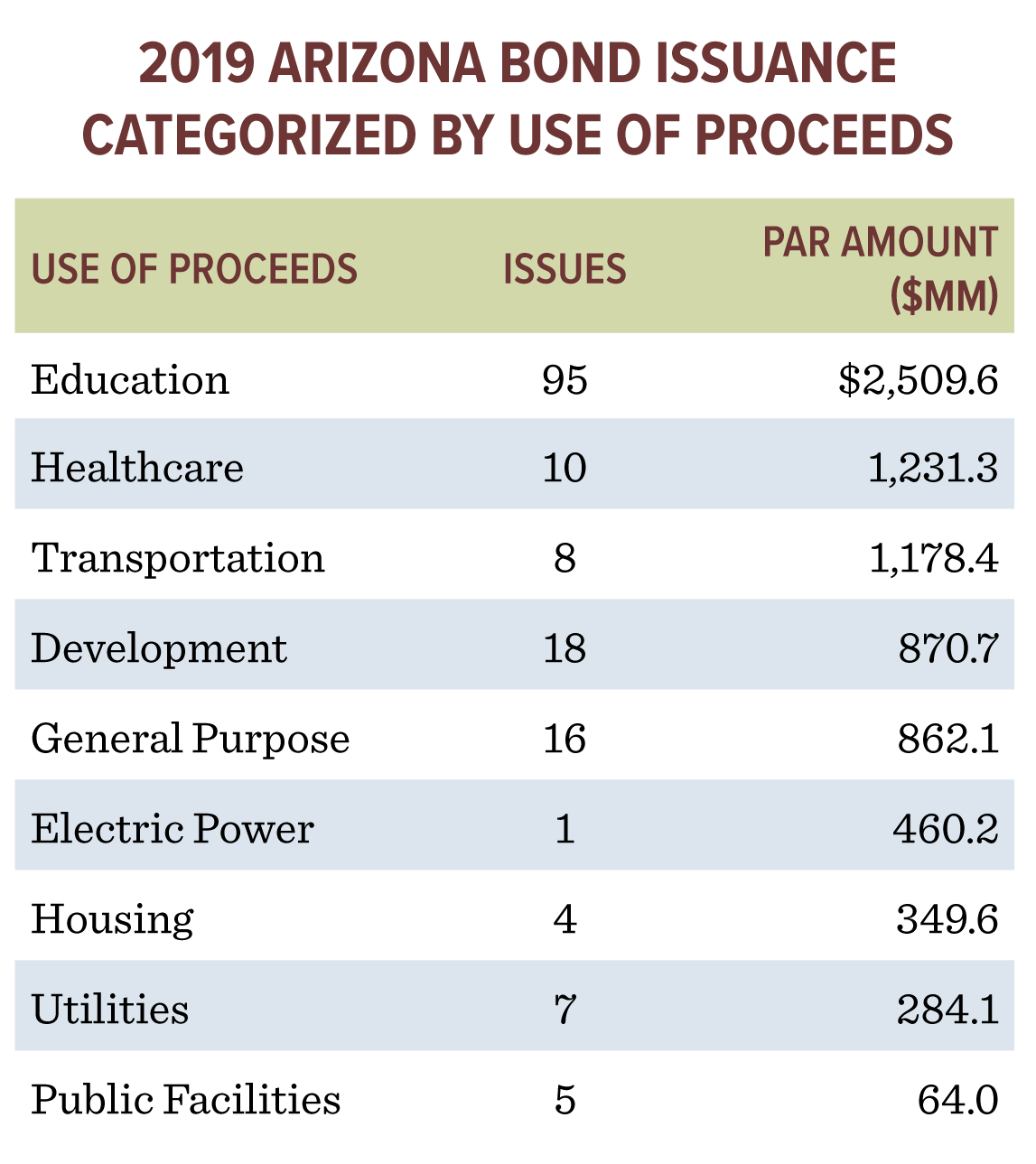 We have highlighted the population growth in Arizona, led by Maricopa County, in recent Aquila Tax-Free Trust of Arizona investment commentaries. Well thought out new construction, expansion, and maintenance capital projects are vital to both enhancing the basic service needs and necessary infrastructure facilities that maintain the quality of life for Arizona residents.

The Education sector was the largest and most dynamic sector for issuance in 2019. This sector features the widest breadth of issuers in both issue size and geographic location. The average issue size in the sector was just over $26 million; with the average size of local school district GO bond issues being only about $20 million. New money raised to support the infrastructure and facilities of our K-12 public education system, as well as charter schools, is a strong positive that is often not reflected in the greater narrative of education spending and education quality in Arizona.

One of the most interesting and impactful aspects of the Arizona market (and municipal market in general) is issue size. While large issuers tend to dominate the actual dollar amounts issued, they issue bonds less frequently, and hence afford fewer investment opportunities in the new issue market. Smaller issues below $25 million accounted for 60% of the new deals in Arizona last year, but only 13% of the proceeds issued. There were only 16 large new issues over $100 million, which accounted for only 10% of the new deals but comprised 56% of the proceeds raised: 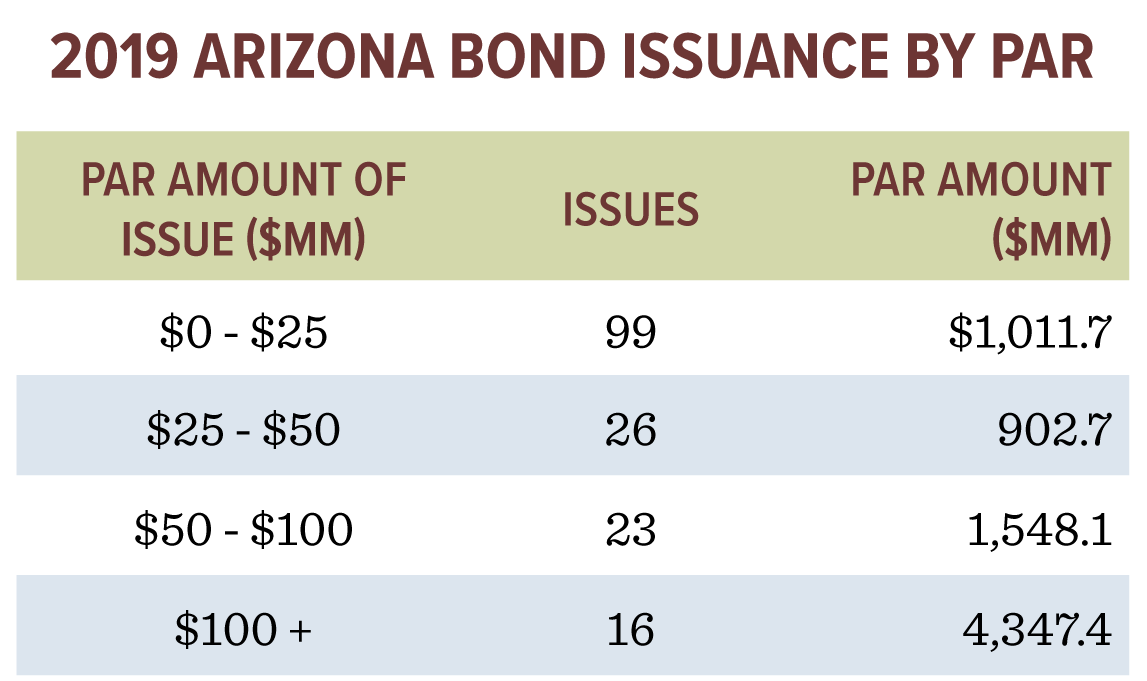 The composition of issuer size is an important factor in single-state investing because it characterizes the opportunity set an investor has to choose from. When smaller issuers dominate the number of deals, it requires a greater local focus to identify and select valuable issues that come to market infrequently, or whose credit considerations are “localized”. These are often the situations in the municipal market that have the best likelihood of being “cheap” or require the borrower to offer a few extra basis points of yield to compensate investors for taking on the risk of owning a less visible issuer. This is something with which large issuers, like The Salt River Power Authority or Phoenix Skyharbor Airport, rarely contend.

We believe the local approach to portfolio management of Aquila Group of Funds is well suited to capitalize on the unique characteristics of municipal bond markets like Arizona’s, where smaller issues present the largest selection of investment opportunities. The benefits of our local market presence are particularly magnified in navigating the new issue market. Our recent thought leadership paper, Municipal Market Complexity and New Issue Investing, can provide further insight into these benefits.

Before investing in one of the Aquila Group of Funds, carefully read about and consider the investment objectives, risks, charges, expenses, and other information found in the Fund prospectus. The prospectus is available from your financial professional, when you visit www.aquilafunds.com, or call 800-437-1020.