Preliminary results indicate that Oregon residents approved $1.45 billion in new bond measures across the State in the 2022 November general election, which is relatively strong. Compared to last November, when $421 million in new bond measures were approved, this year’s results are encouraging. Although results have yet to be certified and therefore deemed preliminary, bonds approved by this election are still less than the $2.1 billion approved in 2020. Interestingly, Oregon typically sees more ballot measures during November general elections held in even-numbered years.

By election measure, approximately 69% of the issues were approved. However, 97% of the total requested par amount was approved by voters (see below).

Oregon schools were the big successes of the election, with over $1 billion in new projects approved across the State. Approved measures range from $45 million for Umatilla School District to $450 million for Portland Community College.

Umatilla School District plans to use bond proceeds to finance projects, including a new fourth through sixth grade school building, with a full-sized gym and playing fields with room for expansion. The bonds are being issued to address housing developments within the district constructed in the last few years. Several housing projects have added close to 200 homes within the District, and a recent major development is estimated to add an additional 326 houses by the end of the year.

The largest education measure on the ballot was Portland Community College District’s $450 million bond. The college plans to use bond proceeds for technology updates, to modernize workforce training facilities, and for improved building safety and accessibility across the school’s campuses. As a part of its campaign, the college announced that it does not anticipate requesting another bond for at least a decade.

A significant marketing point for school issues is the Oregon School Capital Improvement Matching program, which is a grant program offered by the Oregon Department of Education to support communities that pass general obligation bonds for school improvements. Both Portland Community College and Umatilla School District included state grants in their bond proposals. Overall, this election is expected to generate over $26 million of grant disbursements from the State for school improvements.

The election also included some notable failures, such as the City of West Linn’s bond measure to replace three city water pipes beneath the Abernethy, West A Street, and Sunset Avenue bridges along I-205.  The waterlines must be replaced while the Oregon Department of Transportation (“ODOT”) completes seismic improvements on the bridges and widens the freeway. However, since the city’s main waterline hanging beneath the Abernethy Bridge still has approximately 20 years of life left, some residents are questioning ODOT’s requirement that the city pay for the replacement. The opposition to the measure contends ODOT is pressuring West Linn into paying for the improvements, and that voting “no” gives the City Council additional time to pursue infrastructure grants, and lobby State and Federal legislators for financial assistance.

Pleasant Hill RFPD also had its measure fail, with approximately 75% of votes rejecting the measure. This measure was placed on the ballot by a private citizens group, rather than the fire district, and was not endorsed by the District’s Board of Directors. The district opposed the measure, since it would legally max-out its statutory borrowing authority, leaving nothing for emergencies, such as the district’s current equipment needs. The measure also does not provide additional funding to staff a new station. The district plans to present its own measure on the May 2023 ballot. The district is also considering consolidating with Goshen Fire District, and draw out a long-term funding plan that would keep the tax rate low for voters and sustain the community. 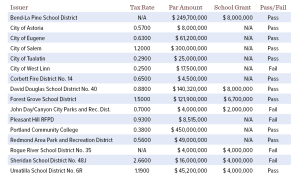 Deal flow has also been relatively light for 2022, with year-to-date tax-exempt, non-AMT municipal issuance through November 15 declining 34% below 2021 issuance for the same time-frame. Recent Oregon issuance has been exceptionally low, without a single new issue for the entire month of October, and only one new issue in September. Overall, this election should provide a much-needed source of additional supply to the municipal bond market.

Mutual fund investing involves risk; loss of principal is possible. Investments in bonds may decline in value due to rising interest rates, a real or perceived decline in credit quality of the issuer, borrower, counterparty, or collateral, adverse tax or legislative changes, court decisions, market or economic conditions. State-specific fund performance could be more volatile than that of funds with greater geographic diversification.

Before investing in the Fund, carefully read about and consider the investment objectives, risks, charges, expenses, and other information found in the Fund prospectus. The prospectus is available from your financial advisor, by clicking here, or by calling 800-437-1020.

Understanding De Minimis as it Relates to Municipal Bonds

The primary benefits offered by municipal bonds are generally well known to investors. Chief among ›