Throughout their history, municipal bonds have generally been viewed as a conservative investment choice for individuals seeking a steady stream of current, tax-exempt income.1 Investors have also long been attracted by the fact that municipal bonds are typically issued by states, cities and municipalities to finance and benefit from local capital funding projects.2

Despite these advantages, it is important to remember that, as with all asset classes, municipal bonds are subject to changing market conditions and potential volatility. However, municipal bonds have demonstrated tremendous resiliency, as evidenced by a history of strong rebounds following significant market declines.

This article provides a summary of recent market volatility, as well as an historical look at how municipal bonds fared during and following down-market cycles.

The first half of 2022 presented a challenging period for fixed income markets, including municipal bonds. The markets have been driven by a number of factors, both domestically and globally, that have produced significant headwinds for municipal bonds.

One of the primary factors has been a concerted attempt by the Federal Reserve (“the Fed”) to help quell inflation and keep U.S. economic growth in check, which has led to numerous increases in the federal funds rate (the interest rate that banks charge each other to borrow or lend excess reserves overnight) with the possibility of additional rate hikes to come. The result has been a dramatic increase in municipal bond yields, especially with the market’s anticipation of further interest rate hikes. And given the inverse relationship between bond yields and prices, municipal bond valuations have dropped significantly in response. This has caused considerable downward price pressure on municipal bonds and is being exacerbated by heavy outflows from retail investors.

We suspect that the municipal bond market will continue to be pressured by the Federal Reserve’s monetary policy that is aimed at helping to stem inflation. What’s encouraging, however, is that much of the volatility to-date appears to be driven primarily by rising interest rate, rather than by credit concerns or other fundamental market issues.

A Look at Previous Market Cycles

As mentioned earlier, not unlike other asset classes, municipal bonds may be influenced by changing economic and market conditions. However, municipal bonds have historically demonstrated strong performance following down-market cycles. Over the last 20 years, in the 12 months immediately following a market decline (or “drawdown”), municipal bonds rebounded to reward investors with positive returns (see Exhibit 1).

Of course, past performance cannot predict the future, so results for the current market cycle remain to be seen. Yet, for each of the six drawdown periods, municipal bonds performed well in the subsequent 12-month period following significant market declines. 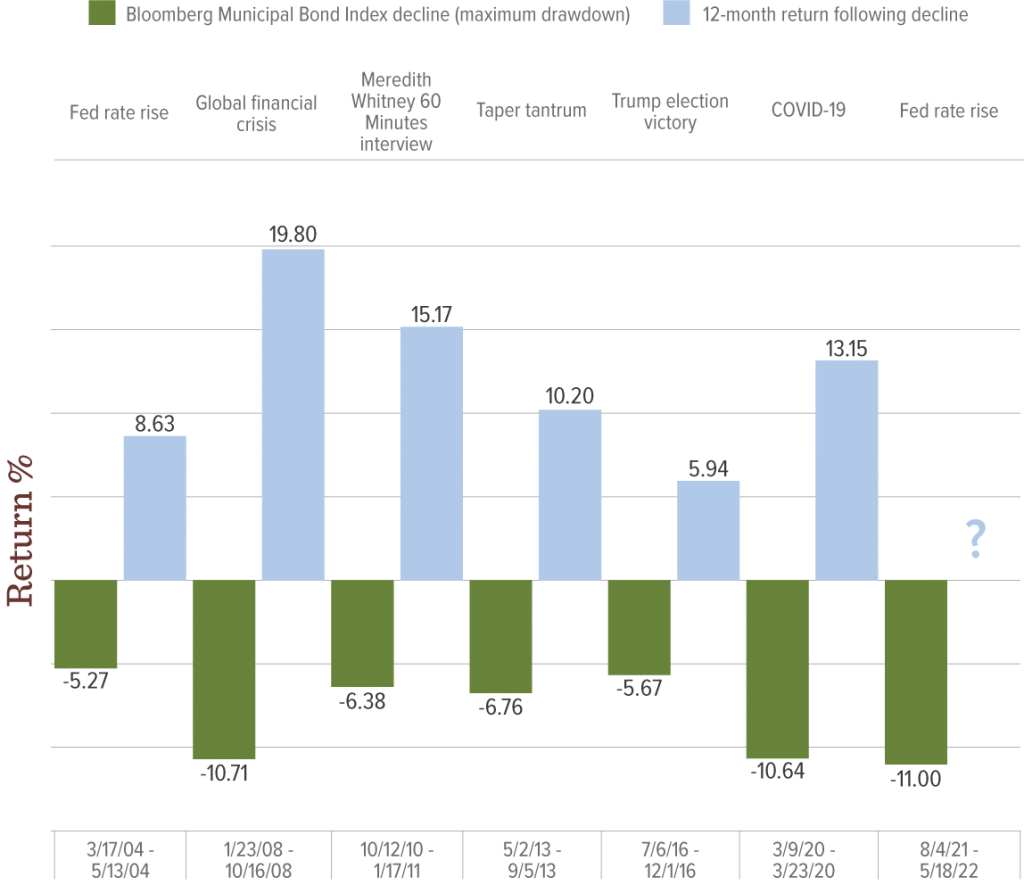 Source: Morningstar Direct, as of 7/31/22. Municipal bond performance is represented by the Bloomberg Municipal Bond Index. Maximum drawdown refers to the peak (high) to trough (low) decline during a stated time period, which is quoted as a percentage between the peak to the trough. Past performance does not guarantee future results.

The municipal bond market has been driven by a number of factors in 2022 that have produced significant headwinds—primarily, the effects of the Federal Reserve’s monetary policy and rising interest rates. Although municipal bond returns bore the brunt, relative yields, price valuations and underlying fundamentals appear to have strengthened. Might this suggest that the current market cycle could continue the recovery trend described above? Time will tell, but it’s an interesting historical perspective into previous municipal bond market cycles.

Particularly during periods of volatility and uncertainty, it’s important to maintain a long-term perspective. While some investors may attempt to avoid market volatility, or perhaps make emotionally-based investment decisions, we strongly suggest that individual investors not try to time the market. Rather, keep in mind the key benefits offered by municipal bonds, and remain focused on your investment objectives and long-term financial goals.

1Income generated by municipal bonds is typically exempt from federal income tax, and may also be exempt from state and local income tax, depending on whether you are a resident of the state in which the bonds are issued. Tax laws are subject to change. This information is general in nature and is not intended to provide investment, accounting, tax or legal advice. Aquila Distributors LLC does not provide investment, accounting, tax or legal advice. Individuals should seek tax advice based upon their particular situation and individual financial goals.

2While municipal bonds may be issued by states, cities, counties or municipalities, their interest payments and repayment of principal investment are not guaranteed. Rather, they may be backed by the “full faith and credit” of the issuer, which has the power to tax residents to pay bondholders (referred to as general obligation bonds). Bonds may also be backed by revenues from a specific project or source, such as highway tolls or lease fees (referred to as revenue bonds). Investors should understand the credit quality of a bond or specific issuer.

Mutual fund investing involves risk; loss of principal is possible. Investments in bonds may decline in value due to rising interest rates, a real or perceived decline in credit quality of the issuer, borrower, counterparty, or collateral, adverse tax or legislative changes, court decisions, market or economic conditions. State-specific fund performance could be more volatile than that of funds with greater geographic diversification.

BLOOMBERG® is a trademark and service mark of Bloomberg Finance L.P. and its affiliates (collectively “Bloomberg”). Bloomberg or Bloomberg’s licensors own all proprietary rights in the Bloomberg Indices. Bloomberg does not approve or endorse this material or guarantee the accuracy of completeness of any information herein, nor does Bloomberg make any warranty, express or implied, as to the results to be obtained therefrom, and, to the maximum extent allowed by law, Bloomberg shall not have any liability or responsibility for injury or damages arising in connection therewith.

Before investing in the Fund, carefully read about and consider the investment objectives, risks, charges, expenses, and other information found in the Fund prospectus. The prospectus is available from your financial professional, by visiting www.aquilafunds.com, or by calling 800-437-1020.

The Lowdown on High-Yield Bonds